Amber has very different shapes: small droplets, similar to fresh honey drops, or large pieces, like a human brain, a skull or an egg.

Good-looking morphologic species of amber are rare. Only fragments of them broken and rubbed are usually found. Knowing their own features it is easy to define the species. 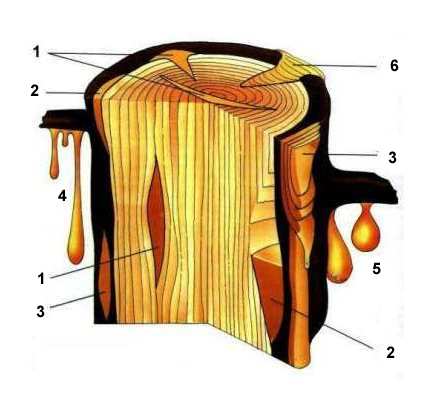 Wooden lenses are transparent because their resins were pressed tightly and isolated from the exterior impact.

Under-bark lenses were formed when resins flowed under a bark, which torn off a wood. Under-bark cavity formed their contours. The imprints of cambium fibrous tissue are always found on the surface of under-bark lenses.

Bark amber was formed in a thick amberwood bark when its laminas moved aside. The bark amber lenses have a very specific irregular shape with cut brims, which were formed by the contours of bark laminas that moved apart. The imprints in both sides are characteristic to them: emerged-in one side, sunken in the same shape-in another side.

Amber drops are the overdose of resin that broke away from the streams, which used to flow through icicles and trunk. They can be of different size; various conservation and deformed structure. Drops flattened when falling are most frequently found (about 30 %). Drops of regular shape are very rare, they might have formed when resin flowed from slits of wood or when they fell into the water.

Trunk amber is morphologic amber species, which is the most plentiful and various. Resin that outpoured on the surface of a trunk made big accumulations that flowed down slowly. Under the heat of the sun they have melted and hardened for many times. Some volatile components emitted because of heat, but not all gases could volatilize from marshy resins mass. Different colours mixed when resins were flowing down a trunk, that is why superficial amber obtained a texture of various colours. The biggest pieces of amber that were found are trunk amber (weigh several kilograms).