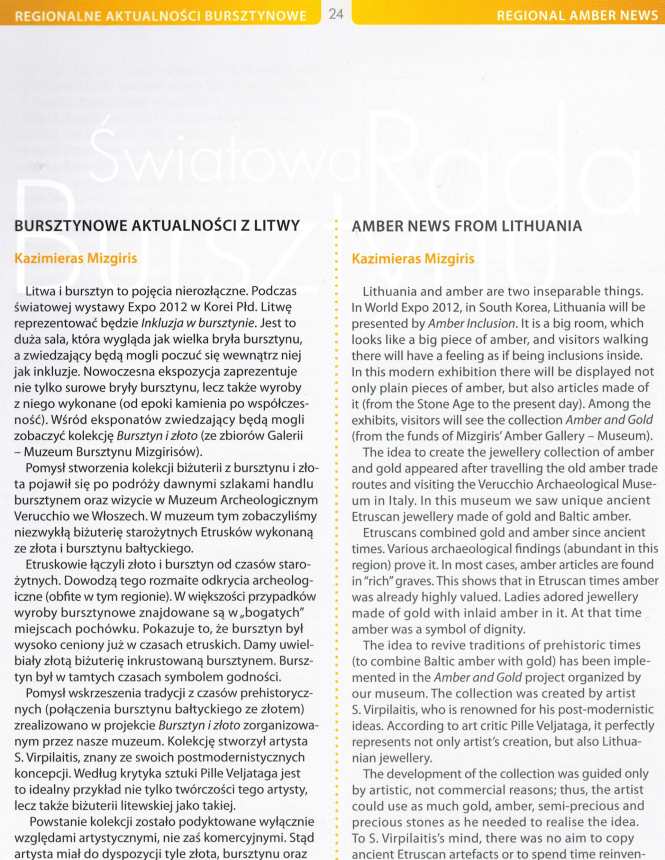 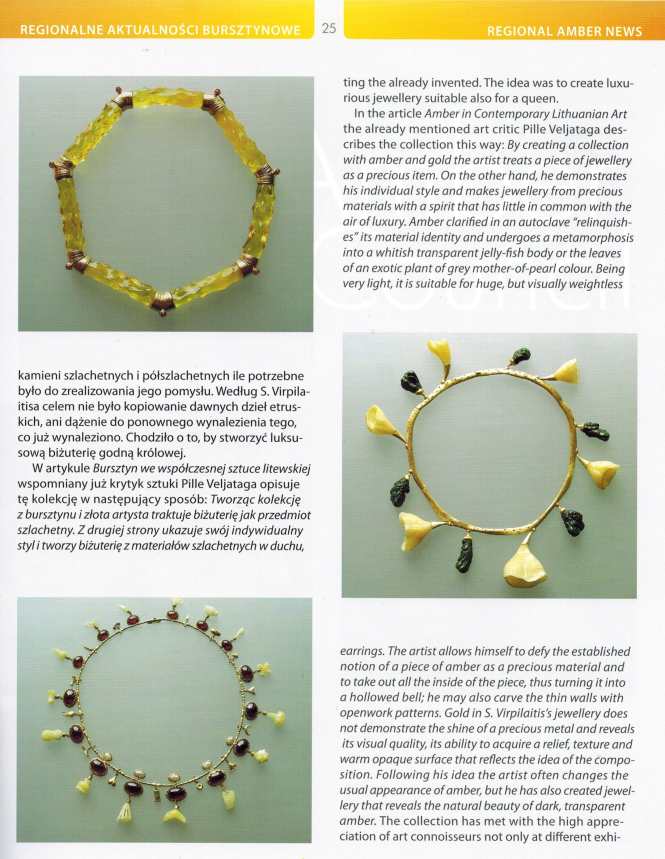 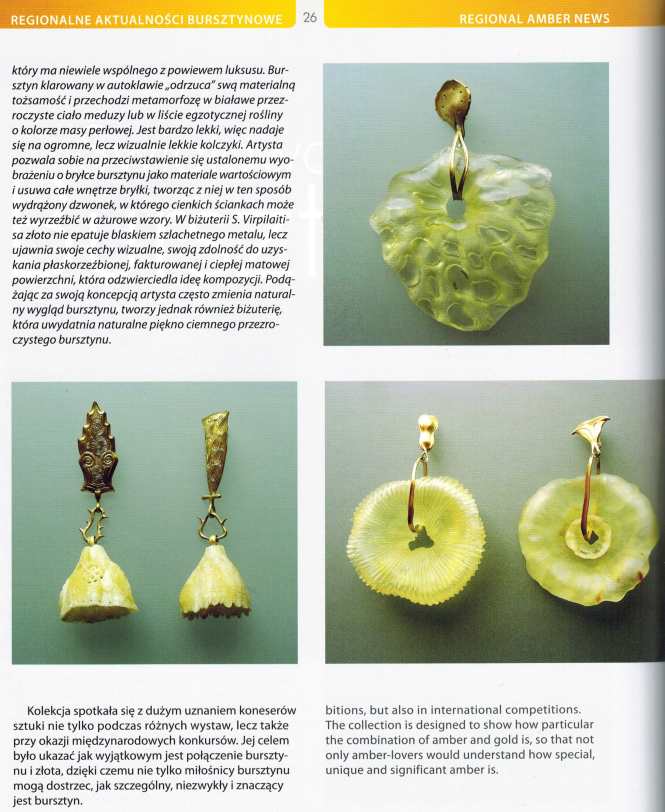 The aim of the competition was to look at amber like an accent of the interior, to grant its contemporary shape by invoking modern language of plastic. One of the basic conditions was that amber should have been understood like vivid accent of the interior. 27 artists from Lithuania, Estonia, and Poland took part in this competition and represented 37 articles. The first place winners were M. Relo and A. Šaulys work “Home Medicine Chest” made of wood with amber pills in it. The bravest article was amber water-closet “St Election daydream” made by S. Vaitiekūnas. The competition attracted journalists and art critics to write about it. Those were A. Jablonskienė, J. Ludavičienė and Pille Veljataga. Each of them had different point of view to extraordinary artistic look to amber in interior. 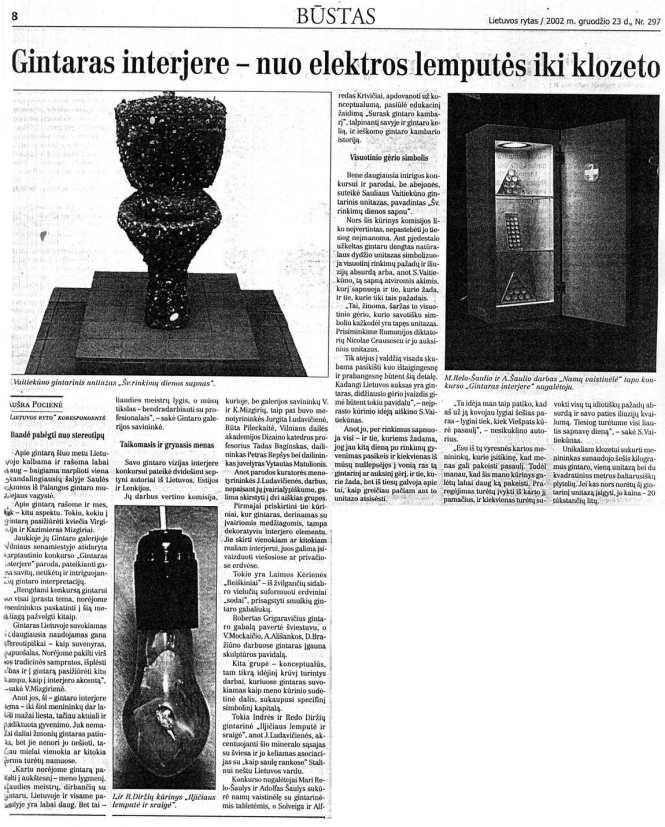 The owners that organized the competition-exhibition raised uneasy task for participators: they had to create a work from one piece of amber. A piece of amber itself had to weigh at least two three hundred grams and it had to be unimproved. Sixteen authors participated in this competition-exhibition, and they presented twenty four works. In competition took part A. Šaulys, S. Virpilaitis, Ą. Vaitukaitis, A. Mikutis, S. and A. Krivičiai, E. Ludavičius, D. Varnaitė and others. The first place winners were V. Vidugirytė and J. Balčiūnas. They created a brooch of amber with silver laser imprints. 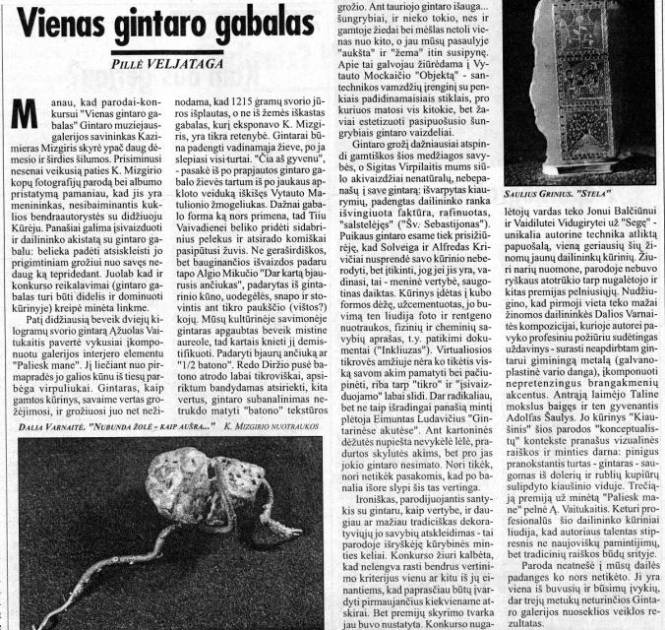 Amber gallery of Mizgiris’ family was invited to participate in the international Baltic amber contest in German Amber Museum (Ribnitz Damgarten). They decided to organize a contest for Lithuanian artists to win the opportunity to participate in the international competition. 25 professionals and amateurs represented their works. According to art critic’s point of view, that was some kind of start of beginners’ school to work with amber. Earlier a piece of amber dictated the conditions how to work with it. Now artists tried to bend this organic material to their extraordinary ideas. The first prize winners were V. Vidugirytė and J. Balčiūnas’ work “Blinding Shine Hides Your Face”. 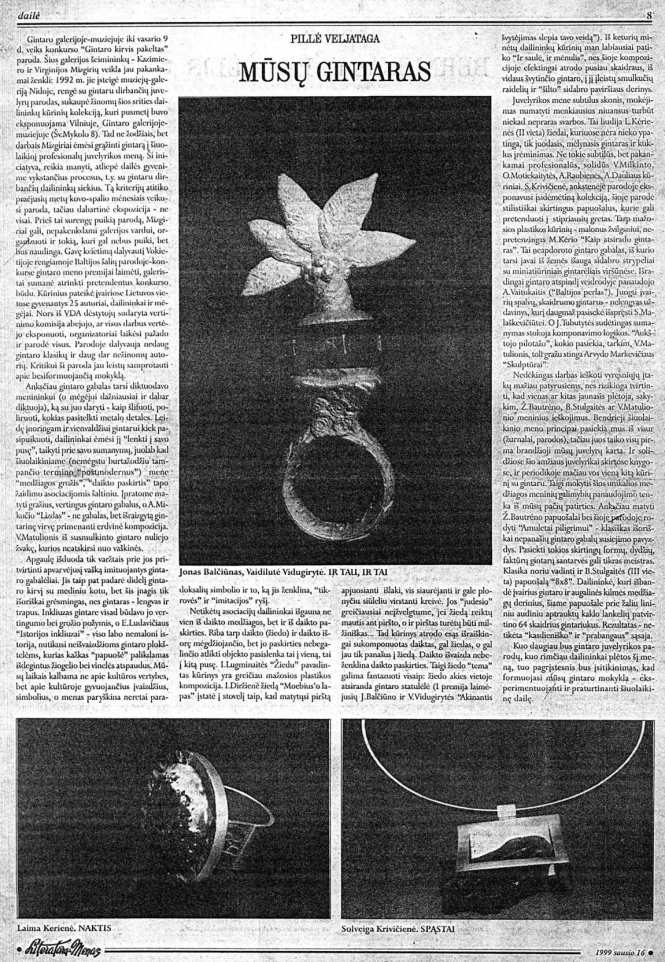 Each Baltic Sea people consider amber as a national worth. Lithuanians call themselves “amber country” and always try to take amber as a present when going abroad. However, the question is if we know everything about amber and value it. V. and K. MizgiriS says that both its users and artists working with it still have to learn more about this organic material. That is why the owners of Amber Museum-Gallery and Artists’ House in Nida organized a symposium in case to know amber better. During it artists recovered unbelievable facility of amber since Neolithic period Juodkrantė’s Treasure to mystical totemic adornments. In this event took part such artists as V. Matulionis, B. Stulgaitė, L. Kėrienė, S. Krivičienė, Ą. Vaitukaitis, Ž. Bautrėnas, A. Mikutis, and others. B. Stulgaitė confessed that intensively worked in the height of election. Her amber hat and small necklace could not match other but A. Adamkienė. A. Mikutis, Ą. Vaitukaitis and Ž. Bautrėnas worked separately but connected their articles into one mechanism. V. Matulionis‘s work “Amber Axe” became a symbol of symposium. Telšiai Higher School of Fine Arts students and teachers also were introduced with symposium. V. and K. Mizgiris were intended to establish a scholarship for students to encourage them to work with amber. After this exhibition the best artists went to German Ribniz Damgarten competition in order to win international Baltic States price for art. “Amber Axe is Raised and we don’t intend to lower it down soon” said V. and K. Mizgiris. 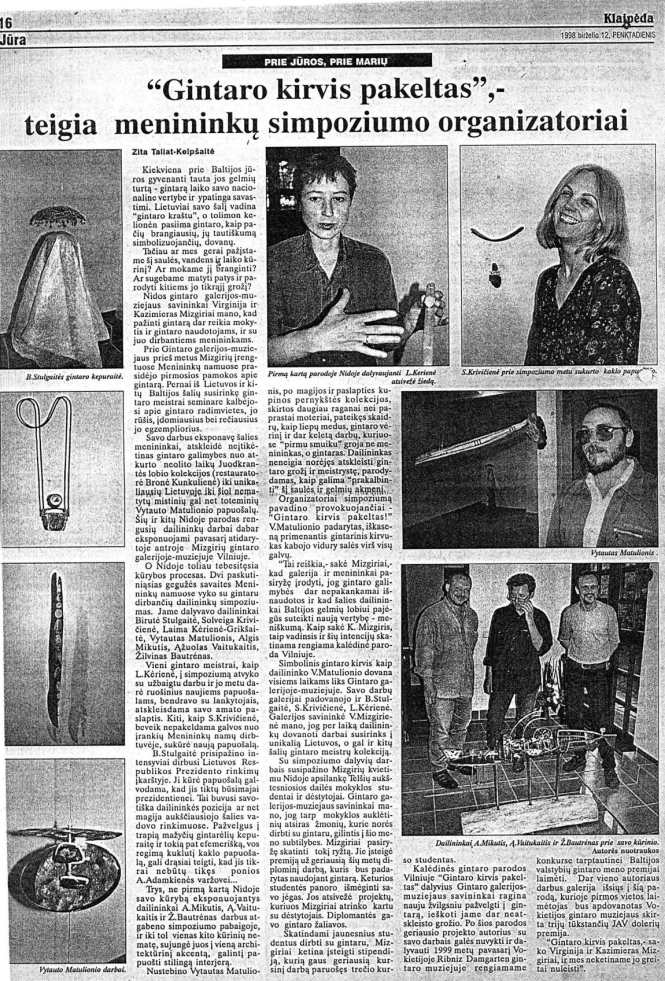