The exhibition presents unexpected and paradoxical games with a topic suggested by the authors from Lithuania and Estonia. Bracalets of Kart Maran are not for body decoration or to protect it from external threats. One of them is very massive and shaped like a ceramic bowl, which you should put on your leg for a punishment. The next one is created of shiny studs balls reminding of small mines ready to swoop into a delicate leg. Sven Tall presented the collection, which was created of terrorists’ technologies and explosive materials. Objects are unnamed, so there is an illustrative list of the components to each: powder, sulphur, nitroglycerine, blood. Forms are like bones or remains of bodies, which in some places are decorated with garnet or crystal. Katrin Veegen fixed two muzzles with chains to the mirror, which a member of any alternative youth group could adorn oneself. Ester Faiman suggested the “paunch” with a dent inside bearing a forged metal silhouette of a baby.

The authors Andrea Wagner and Terhi Tolwanen’ presented the exhibition like an attractive show: women clothing silhouettes were cut out of blue material hanging on the ropes and fixed with clothes-pegs. Modern and youthful jewellery were beautifully matched to blue silhouettes. 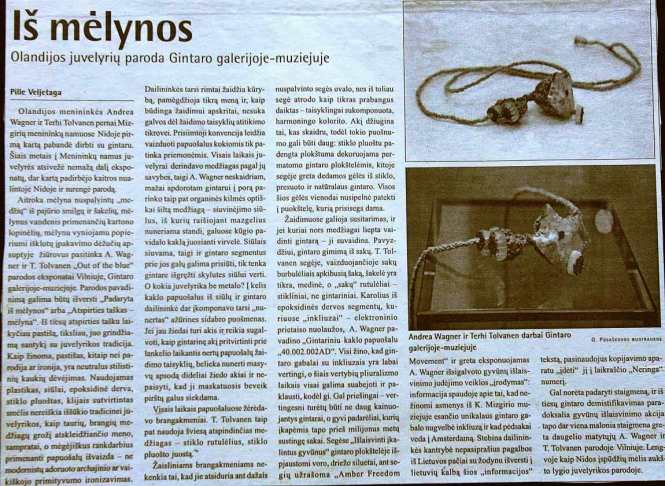 Ąžuolas Vaitukaitis was already well known author and Saulius Grinius was just a beginner in 2001. Together in this year they organized an exhibition of their works. Ą. Vaitukaitis professionally and rationally combined amber with silver, allowing reflecting on the goal of combination. The author played both with colours of amber, and its form. Meanwhile S. Grinius’s articles were full of irony. Jeweller saw and used irregular form of amber, and its complicated shape. Every article had its own style. 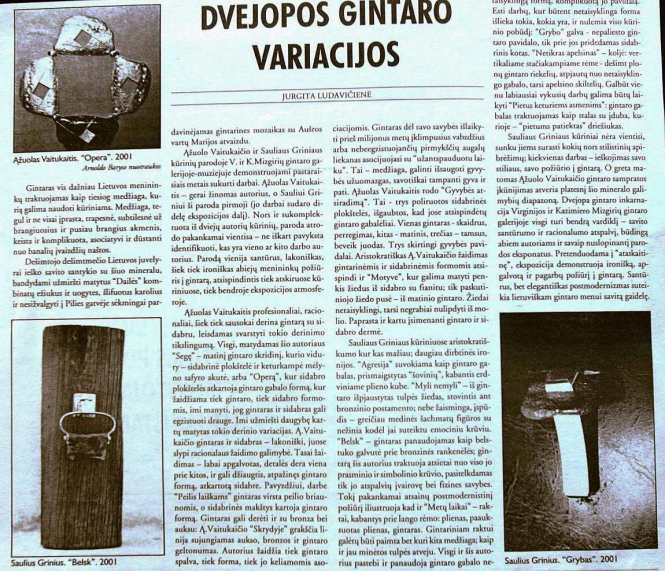 Works of three foreign jewellers, the ones who are working with amber, are introduced in this exhibition. They are master Adolfas Šaulys and Mari Relo-Šaulys residing in Estonia and also a well- known representative of modern jewellery  Karel Votipka from Czech. K. Votipka has been  working in the field of jewelry for a long time and takes part in international exhibitions in Europe and over the Atlantic ocean. His works were part of the jewelry exhibition of the U.S. Secretary M. Albright and visited many American museums. A great while K. Votipka used amber pieces in his works, like other jewelry materials – gold, silver, diamonds and other precious metals and stones.