Exhibitions of the foreign artists in the Artists’ House in Nida

“Thomas Mann festival promises to be quiet and deep”

During the 5th festival classical music concert was in Nida’s Evangelical Lutherans church. Here took part well known musicians and scientists from Lithuania and abroad. In this festival participated chamber choir “Aidėja”, National quartette of Vilnius, Rūta and Zbygnievas Ibelhaupt, trio “Carma”, pianist Petras Geniušas, St Christophor chamber orchestra and many others. In the festival there also was a documentary exhibition about T. Mann summer house builder H. Reismon. Frid Mann, grandson of T. Mann, also visited Nida. What is more, at the same time in V. and K. Mizgiris Amber Gallery-Museum was an exhibition “Out of the Blue”. The authors were Tehri Tolvanen and Andrea Wagner. 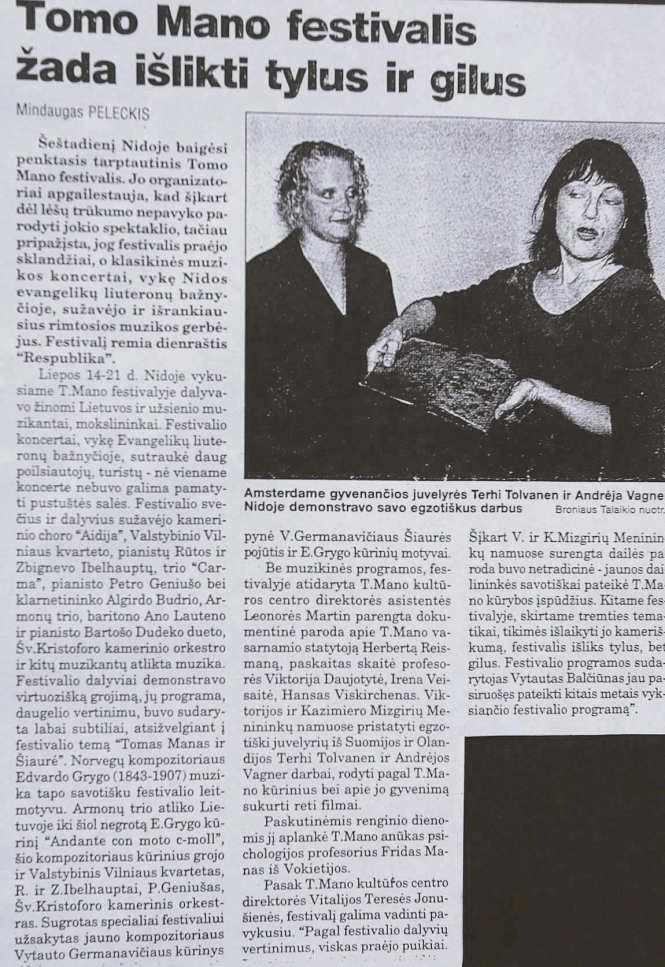 A couple from Iceland, dress designer Hildur Boladotir and jeweler and sculptor Ofeigur Bjornson lived and worked in the Artists’ House. They state, that they discovered most about amber in 2001, in the House of Nordic countries (Reykjavik) during the Baltic culture days, where Lithuania was presented by the mobile exhibition “Baltic amber: the history and design” of Virginija and Kazimieras Mizgiris.. So, the artists got interested in amber. O. Bjornson presented his works, jewelry with amber, in the exhibition “Meeting”. Although, that was the first time he had amber in his hands, but the exhibited necklaces show, that Bjornson treated amber alike natural Islandic stones. Stone shape and texture remain intact, he cut only some of natural amber piece, like opening the windows to the inside, demonstrating unique color of amber.

The jewelers Finn Terhi Tolvanen and German Andrea Wagner residing in Amsterdam, organized an exhibition “Occupied” in Mizgiris Artists’ House. They exhibited exotic, northern local colour works. Both artists state that a trip to Lithuania was determined by their goal to start creating jewelry of amber; they were interested in opportunities amber had for them. T. Tolvanen’s works aren’t very practical. Perhaps only a quarter of her jewelry is created to adorn, others are like a fashion collection.

Polish jeweller Arkadij Volski and his companion Martha Schoenek lived and worked in Mizgiris Artists’ House and organized his exhibition there. The Volski name is identified with the vanguard among polish jewelry. Although he is not considered to be called a professional – he doesn’t have education of the Science of Art – but his works stand out in generic context. Freedom and ease is characteristic to his creation. His jewelry opens the beauty of real barely touched piece of amber.

The artists from Prague Aleksandra Horova and Rene Horas organized an exhibition in the Artists’ House and exhibited their first experiments with amber. The exhibition of A. Horova could be evalued as the author’s presentation, a business card of her creative work. Rings are her exclusive exhibition itiems created in artistic galvanization way: inside of the ring is of plastic and the outside is of pure silver crystals. A form of each ring is well thought-out and the motifs are linked with the sea. She also presented her first six amber rings made using one amber piece. R. Horas creates jewelry-objects of plastic. Amber in a modernist’s hands “disappears”, it becomes adequate to plastic.

The exhibition of the group “F.F.F.F.” of five Estonian jewelers organized in the Artists’ House proved that there is also exhibition’s art besides jewelry art. They exhibited their works in transparent plastic bags suspended on the walls. The exhibition is an example of postmodern jewelry. The name of the group means “fan for five females”. This is a group of a conceptual art also organizing exhibitions of photography and installations. The Artists’ House presents a few large format color photos where jewelry is captured from both sides. For them it seems that not only fa?ade-side is valuable but also the “wrong” often hidden side of jewelry. The exhibition proclaims that it is important for artists to get free from traditional materials of jewelry and make art of everything around. Berit Teeäär creates jewelry using corks of champagne bottles. Kaira Rannik uses soap in her jewelry as soap is sometimes similar to diamonds, because of its color and form. In the first trials with amber, they created small-scale jewelry combining amber with stone or wood.

Artists’ House in Nida. Artists’ House patroness Virginija Mizgirienė said that the season of the year 1999 was different from others. Most of artists took amber in their hands for the first time. The creative idea became the most important thing but not showing oneself master of amber. That year took part famous Lithuanian jewellers V. Matulionis, A. Vaitukaitis, A. Mikutis, S. Grinius, E. Ludavičius, S. Krivičienė, B. Stulgaitė, A. Daulius, M. Relo, A. Šaulys, J. Balčiūnas and others.

Czech Pavel Opočinski is an artist, who breaks stereotypes and creates a new concept of amber. The author works with all available materials, even those that he finds in the scrap-heap. Amber was a completely new and unknown material for him. It was like a land of discoveries. Taking amber into his hands P. Opočinski remains himself. Amber-works of small plastic are of simple form. The artist doesn’t “destroy” amber but is looking for unexpected reflections of light and colour. His amber-works “talk” only when illuminated. Amber colour formed over thousands of years, its transparency and drastic inclusions of P. Opočinski is a clash of old and new.