“Amber dripped from a pine, which is unknown to us. This pine grew near the various palm trees, sweet chestnuts, eucalyptus, magnolia, oak, juniper and beech. Amber is a fruit of an ordinary tree, but it is eternal” 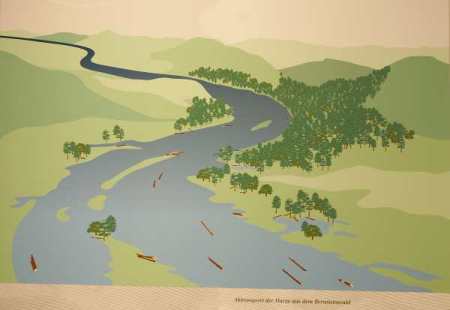 The various nations wove numerous legends and myths into origin of amber. Greek myth tells of Phaeton, the son of Helios, the God of sun. One day Phaeton managed to convince his father to allow him to drive his horse – drawn sun chariot down the firmament. The father agreed, but as soon as the horses felt that the charioteer was inexperienced, they bolted. As to prevent damage, Zeus was forced to strike Phaeton with a lightning into the river Eridanus (Po). Phaeton’s sisters, Heliades, lamented his fate, so Dzeus being merciful turned them into trees. Grieving, they kept crying, and their tears became amber.

There is also a legend, which tells that in ancient times there were actually two suns in the sky. Eventually the gods decided that two suns could not shine from the sky and sent one of them down into the ocean where it got cool and solidified. Then it hit the bottom of the ocean splintering into thousands of fragments. Since then plenty of fragments of the sun (amber) in various sizes have been washed ashore. Another legend states amber is a hardened sea foam, dissolved by the heat of our luminary heavenly body. Other myths claim that the amber is the petrified roe of mysterious fish, or petroleum that has solidified in sea water, or, perhaps, even the sacred resin which the gods inadvertently let slip.

But the most romantic legend is the Lithuanian people‘s legend of an unhappy love between goddess Juratė and fisherman Kastytis. The God Perkūnas, learned a mortal son of the earth dared to touch the Goddess of the Baltics, threw down a bolt of lightning, which shattered the amber palace on the bottom of the sea and drowned Kastytis together with his boat. Ever since waves have been washing ashore pieces of amber – fragments of the palace and after storms the shore is strewn with smaller pieces – Jūratė’s tears that she is still mourning.

The scientists and the sages also had many versions about origin of amber. Plato (427 to 347 BC) thought the amber and magnet were of single-origin, they both attract objects.

The Romans claimed that amber is hardened tree resin. During the governance of the Emperor Trajan (100 years AD), Tacitus in his work “De origine et situ Germanorum liber” (Germanic geography and culture, chapter 45) described amber of Sambia, Eastern Prussia, its deposits and formation: “Amber is no other than tree resin. It keeps  land animals and even winged insects trapped in  runny  tree resin;  unable to break free they remained preserved in hardening resin.“

However, this recording was forgotten.

Middle Ages‘ scientists drew their own conclusions and quite often they were wrong. For example, Agrikola (1494 – 1555) denied that the amber was of plant origin. He thought that amber was formed of liquid bituminous material, which was deep in the earth, and hardened in the air. According to J. Kordanas (1551) the amber emerged from the foam of the North sea, which was formed from the secretion of whales. H. Ludolf (1725) argued that the amber was a composite of stone oil and sulfuric acid formed in the depth of the earth. The composite penetrated through the sea bottom and interflowed with urea of sea animals. The sea threw the composite ashore, there it hardened and turned into amber. G. Bufon (1873) believed that amber was formed of the bee honey. H. Girtaner (1876) had his own version as well, he thought amber was a product of huge ants.

To imagine how everything happened, we should travel some tens of millions of years back to the southern regions of the present-day Scandinavia and nearby regions of the bed of the Baltic Sea (the formation of the Baltic Sea began only 13 thousand years ago) where coniferous forests grew more than 55 million years ago. There grew evergreen, oak, beech, red chestmut, elm, laurel, willow, maple trees as well as palm trees, magnolias and cinnamon trees. The climate was warm and humid. Big amounts of resin was extracting of pine trees “Pinus succinifera”. If the resin had been deposited on the forest floor, it would have been destroyed by oxidation and drying processes. Therefore the first and most essential step to conservation was rapid transport by rivers out of the forest into oceans or lakes, where the amber was protected from weathhering. Nearly all of the amber deposits known so far are found within marine environments, on so-called secondary deposits. Nobody know, how long existed the amber forest. The presumption is that it could take from one to 10 million years