About Virginija and Kazimieras Mizgiris 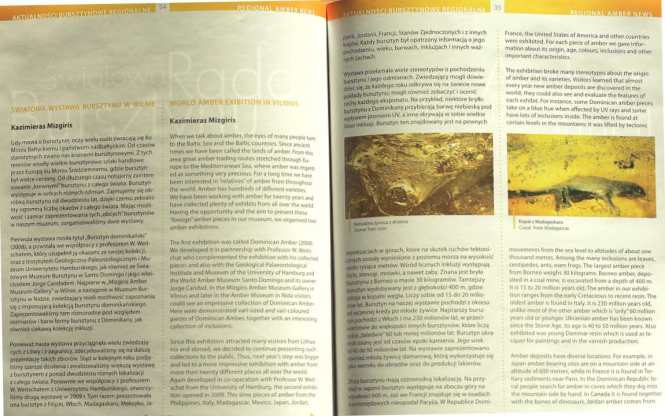 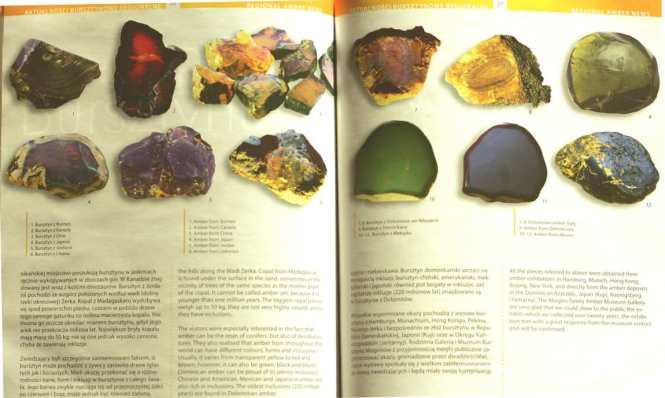 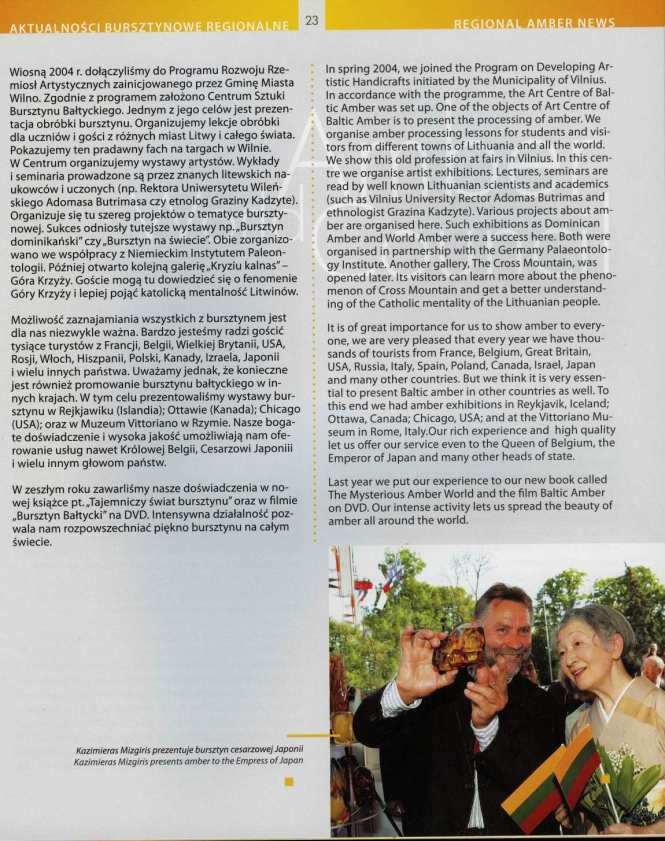 One of the most beautiful private capital investments in cultural heritage is Virginija and Kazimieras Mizgiris’ Amber Museum-Gallery in Vilnius, St Mykolo st 8. It is located in the building of the 17th century. 150 years the house belonged to abbey, then, to Vilnius chapter, while later on simple citizens settled here. In the basement there are two ceramic kilns of the 15thcentury – that is a very rare thing left until these days. Mizgiris family funded restoration of gothic, baroque and classical architectural space. Now it has another function – exposition of amber history and articles. 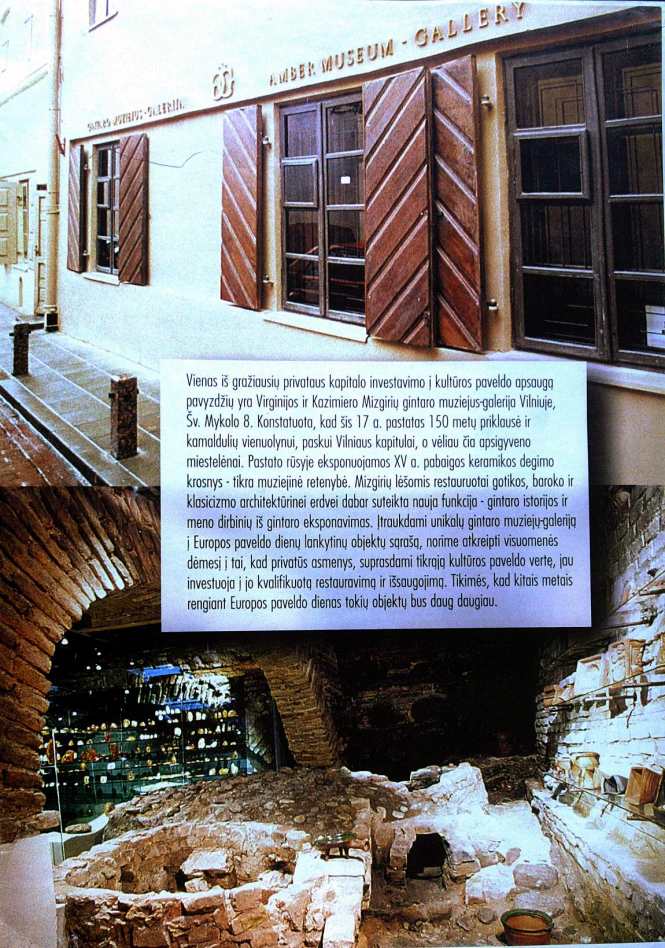 This honourable title well known Lithuanian photographer and the owner of amber galleries got from International Amber Association, located in Gdansk (Poland). The diploma and award were presented by Jan Kotėja (Amber Galerist of the year 2000). The association members were fascinated by the exposition of amber pieces and its history in Amber Museum-Gallery. This was the first international award, except one more in Canada, where Virginija and Kazimieras Mizgiris were called kings of amber. They exhibited there inclusions, Juodkrantė’s Treasure and amber jewellery. 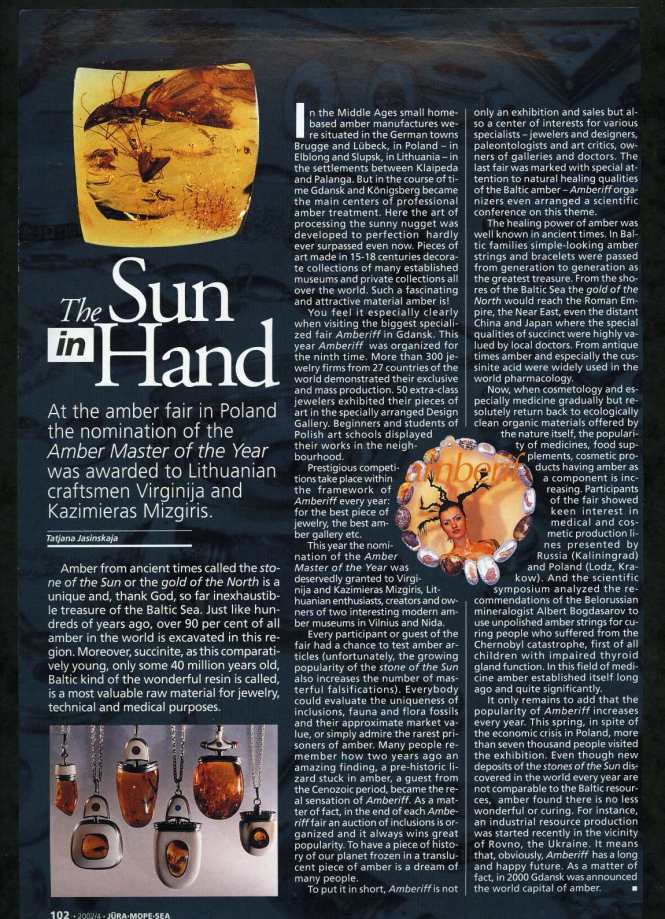 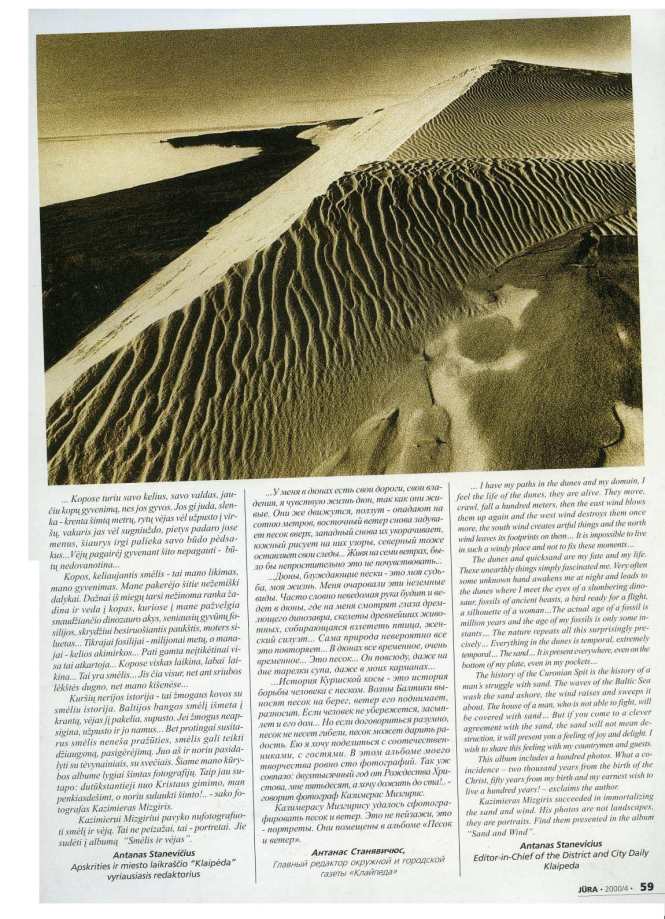 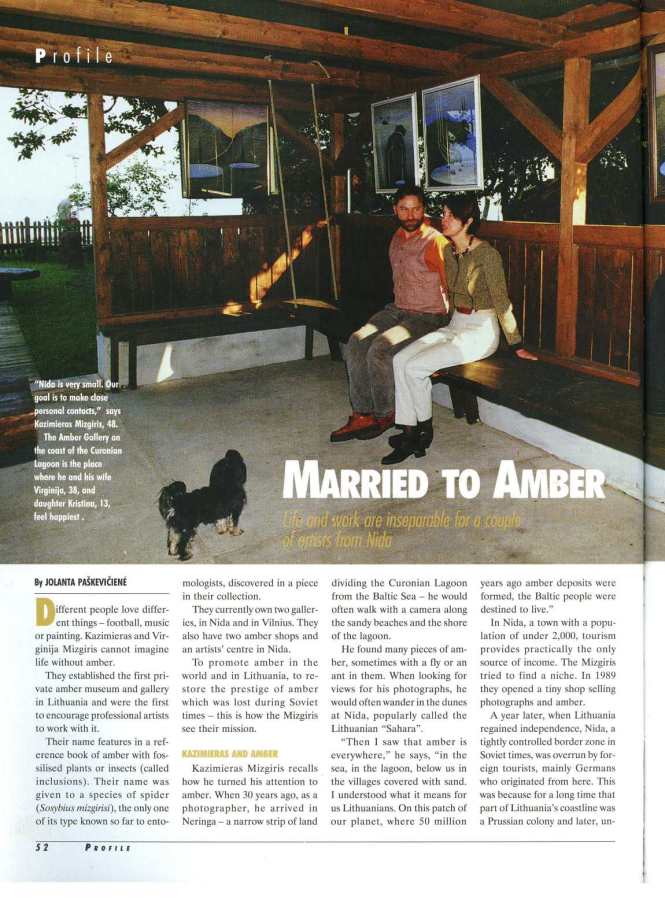 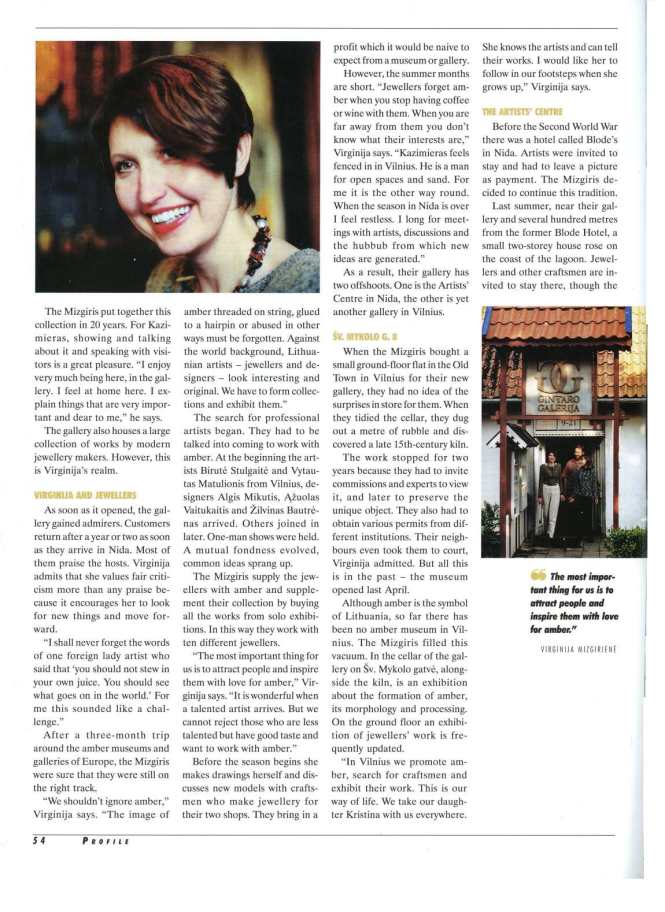 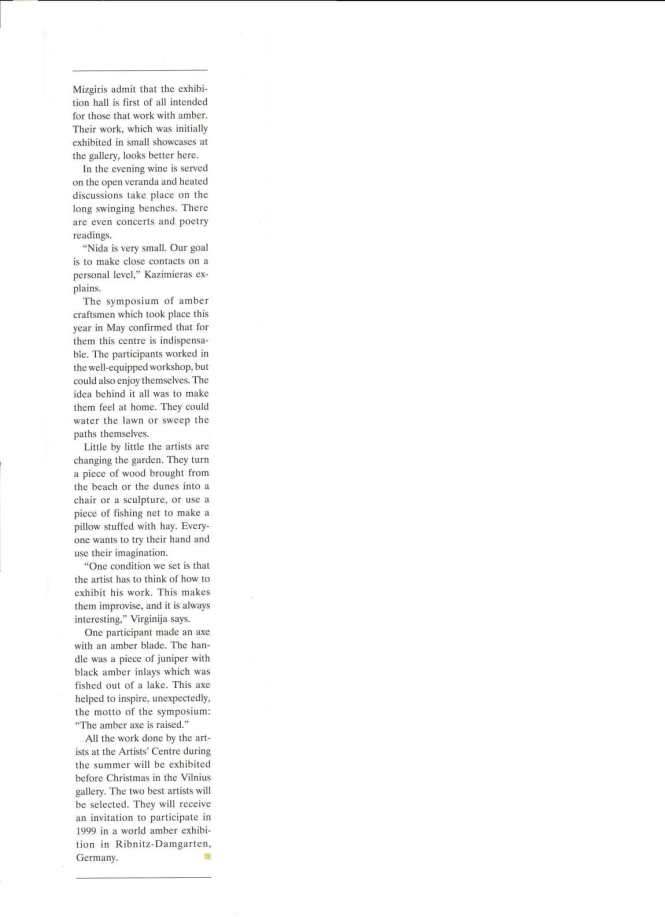 In 1993 Mizgiris family opened the first private amber gallery in Nida. Their aim was to return amber to contemporary art, also to interest different artists never worked with amber to try to create something of it. This encouraged Mizgiris by building Artists’ House in Nida. Logical move was to open Nida’s gallery branch in Vilnius. In Vilnius in winter, in Nida in summer Virginija and Kazimieras devote themselves to the most important thing to inspire artists to work out something new of amber. Each time the article is different: ironical, associative, posh, contemporary, subtle etc. Well known Lithuanian artists take place not only in national but also in international contests and win first places.

Mizgiris amber gallery opened in Šv. Mykolo st, in spring of 1998. This place organized not only well known Lithuanian contemporary artists working with amber, but also returned for capital one of the most authentic archaeological founding of the 15th century – two ceramic kilns. This treasure can be compared with Juodkrantė’s Treasure.

According to art critic Pille Veljataga, it was a time to distinguish professional artistic conception of amber from the term “folk artists”. V. and K. Mizgiris took up the initiative to encourage jewellers’ attention to amber, to get it back to artistic sphere. Thus, a very important feature of amber gallery was the collection of contemporary artists. Ten different artists with their peculiar point of view to amber exhibited their adornments, objects, compositions. Everything matched with modern gallery equipment. 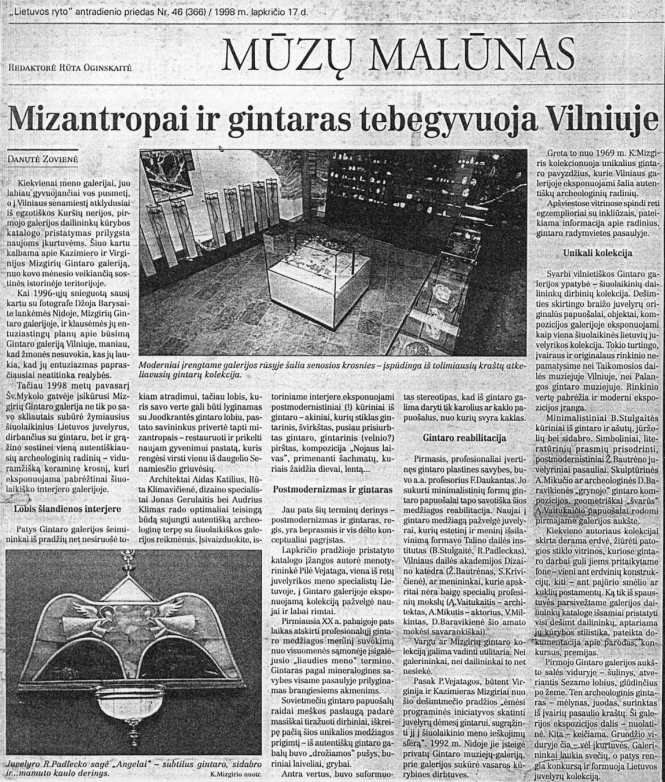 V. and K. Mizgiris opened Amber Gallery-Museum in Vilnius. During the works, archaeologists found two ceramic kilns of the 15th century. In the building of the 17th century there use to live some kind of Saugavičius, then priest Jonas Andzejevskis, then 150 years it belonged to Kamaldulių Abbey, after that to Vilnius Chapter, when finally simple citizens located here. Archaeologist G. Gendrėnas said that it is a very unique and valuable building not only for Mizgiris family but also for Lithuanian culture. This place connects the 20th, 17th, 15th and 14th centuries culture.

Next to archaeological museum there is also located Amber Museum-Gallery. Here is a very big collection of amber pieces of different colours, shapes, size, and insects inside. Also, Juodkrantė’s Treasure – amber amulets – takes honourable place in the museum.

During the opening, well known Lithuanian artists represented their articles with amber. Among them were V. Matulionis, Ž. Bautrėnas, S. Krivičienė, A. Vaitukaitis, A. Mikutis, V. Milkintas, and R. Padleckas creations. The most honourable guests were the first president of independent Lithuania Algirdas Brazauskas and Russian Federation ambassador in Lithuania Konstantin Mozel with his wife Tatjana. 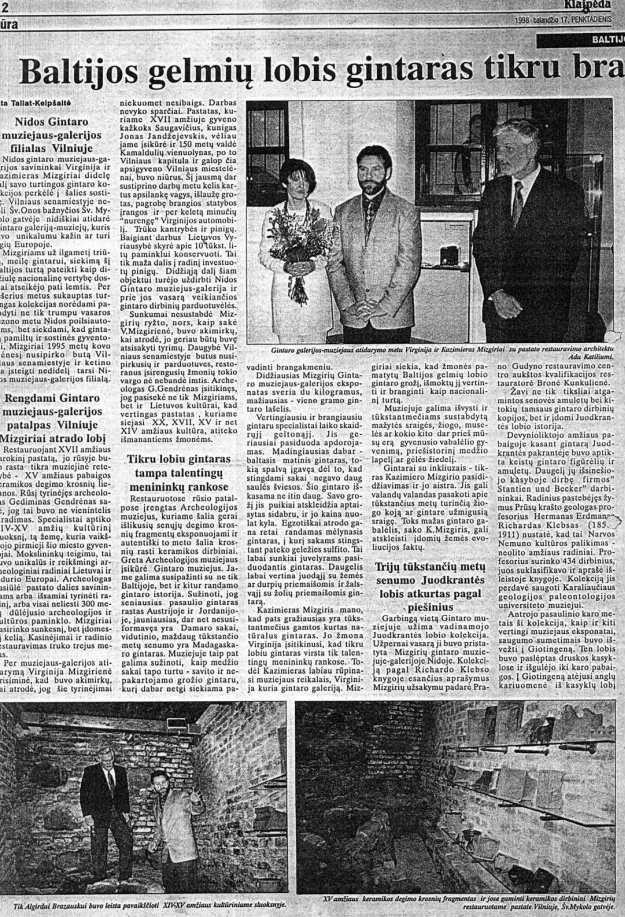 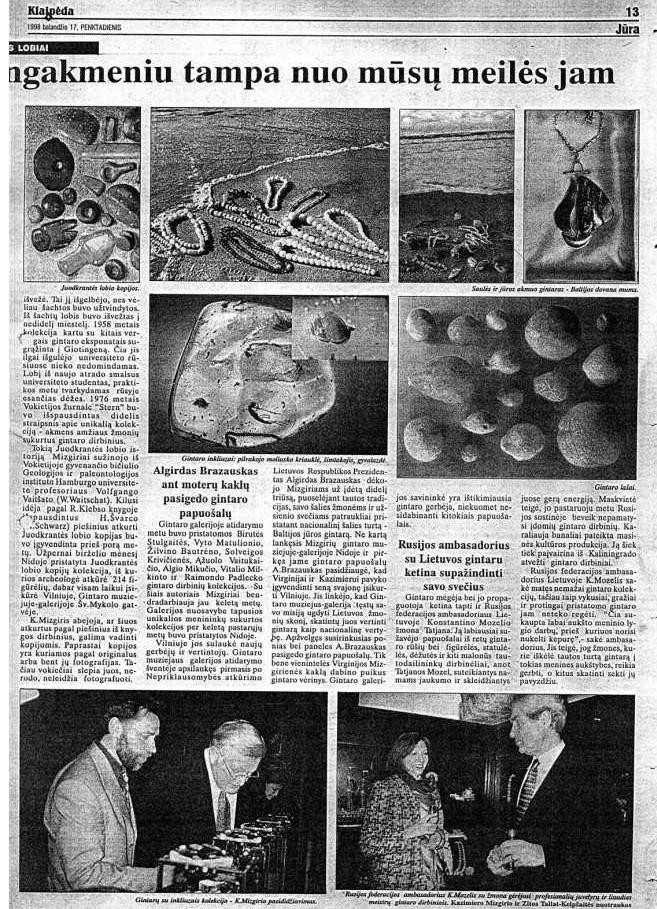 According to experts, it would be very difficult to measure the kilns value. This founding of the 15th century is unique European archaeological monument. Supposedly, there were made tiles of the Lower Vilnius castle. The restoration of the basement lasted three years. This 500 year old treasure is a “concurrent” for the Amber Museum-Gallery, where are exhibited the collection of amber pieces interesting in colour variety, shape, insects inside. Not only amber and kilns, but also articles of contemporary artists are unique. The main reason of opening the gallery in Vilnius was to work with artists entire year, what was not possible in Nida. 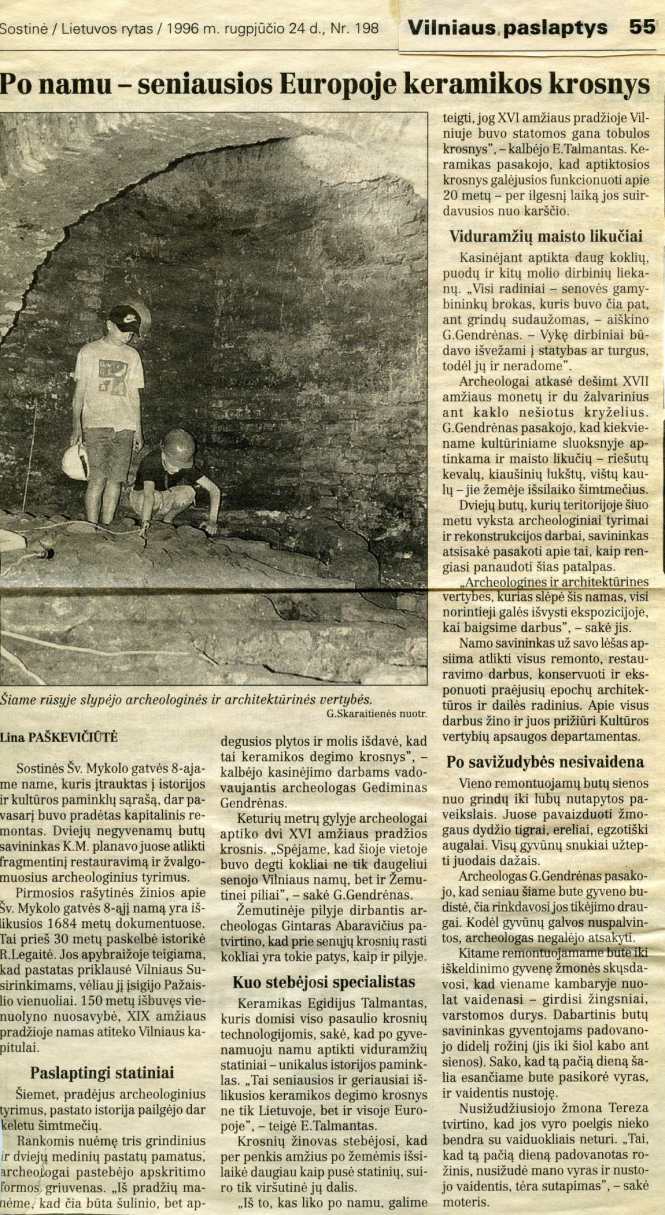